Gamelan, Still Exist and Will Not Be Eroded by Globalization 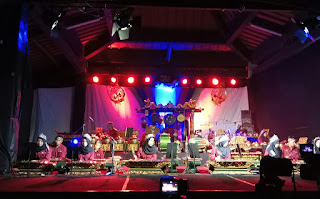 
Javanese gamelan can be called as one form of ethnical music diversity in Indonesia. It turns out that in the present time the people's attention does not just disappear. In the 8th gamelan parade held in Klaten, Central Java on December 31, 2018, it can be proof that many still pay attention to this Gamelan. Besides the program, it was filled by various students from various universities in Yogyakarta Special Regency it turns out that the event was also filled by young people /I and also the ladies and gentlemen of local residents who had previously practised to bring gamelan music. This activity was held to coincide with the celebration of the new year 2019 with a variety of music / songs that were sung along with the arrangements.
The most interesting thing from this event is, that every participant who attended received one “othok-othok'' a traditional game that was played by swinging and playing which had been prepared by the committee to …
Posting Komentar
Baca selengkapnya
Postingan lainnya